We were approached by Techniquest who are an educational charity located in Cardiff Bay…They were very interested in our U-Turn Round audio point due to the fact it runs entirely on wind-up energy, therefore not requiring mains power which was ideal for use on Cardiff Bay.

Cardiff became the capital city of Wales mainly due to Cardiff Bay, which was used to export coal from South Wales to the rest of the world from the 1800’s onwards. Cardiff saw a massive boom thanks to its docks and grew at a staggering rate of nearly 80% per decade between 1840 and 1870. Thanks to the coal industry Cardiff remained a wealthy city until a large amount of industry closed down after the Second World War, sadly falling into dereliction. 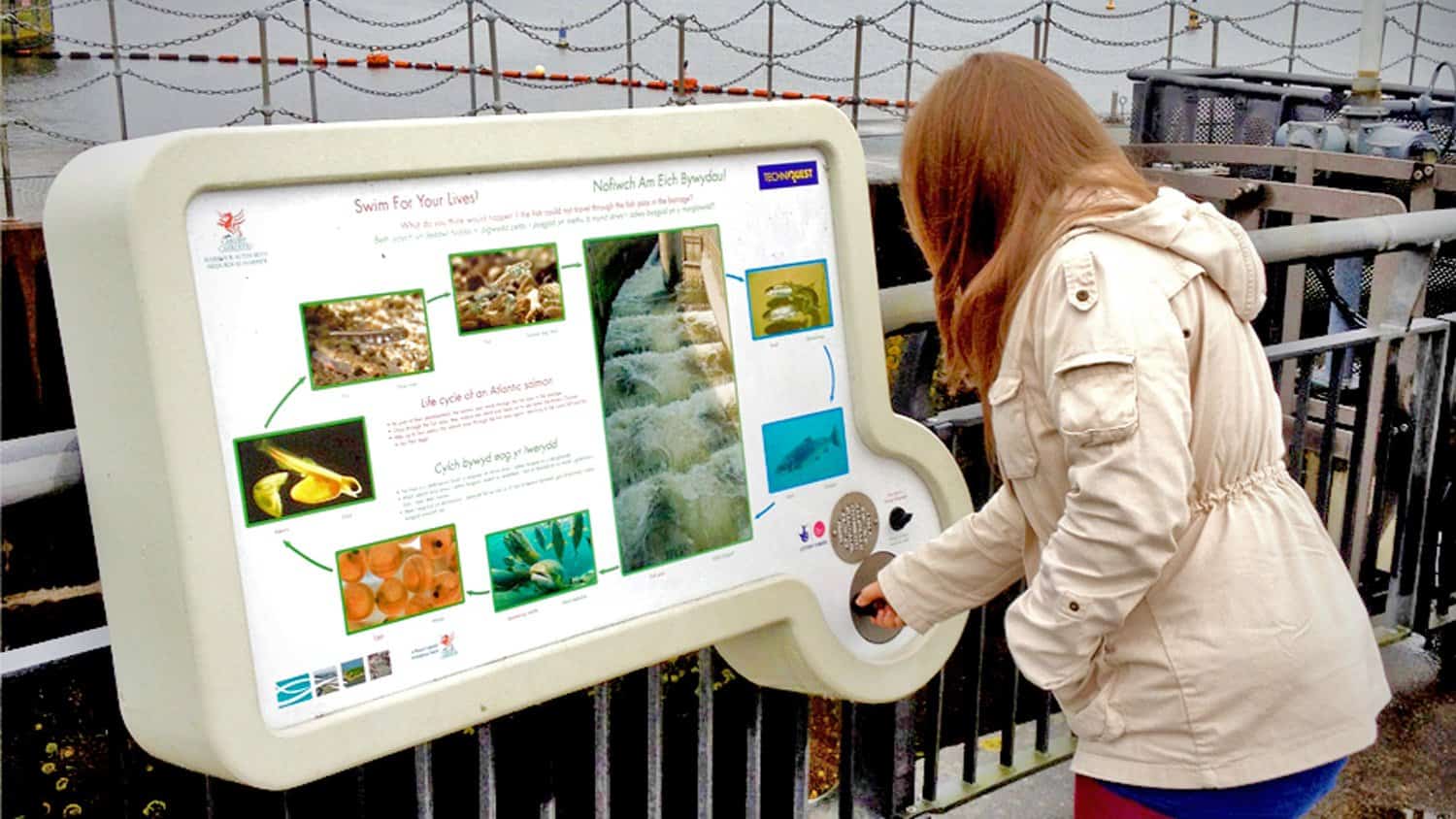 In 1987 the Cardiff Bay Development Corporation was set up with the aim of rejuvenating the 1,100 hectares of old derelict docklands of Cardiff and Penarth. This included the 1999 construction of the Cardiff bay Barrage, although at the time there was a certain level of controversy surrounding this decision it is now considered a resounding success.

Thanks to the Cardiff Bay Development Corporation which wound down in 2000, Cardiff Bay has been completely reborn and has transformed the appearance of the Cardiff waterfront. 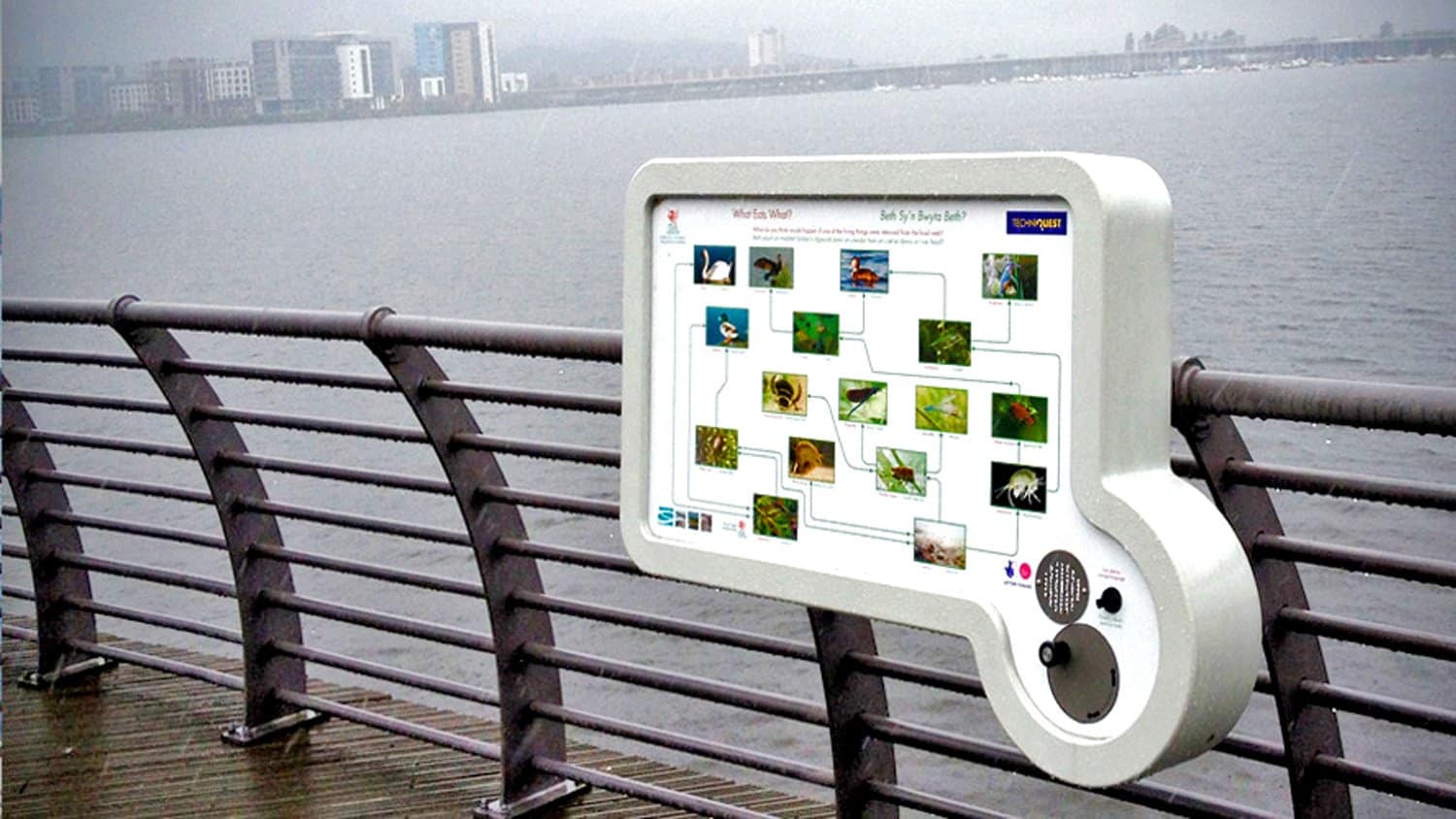 We were approached by Techniquest who are an educational charity located in Cardiff Bay, their goal is to “engage people with science and to motivate them to learn more”. They were involved in a project with the Cardiff Harbour Authority the aim of which was to create some educational signage around Cardiff Bay that would teach people about the local wildlife. This signage needed to have two functions, 1- Fulfil the role of a standard sign and 2- Operate as an audio point in which messages could be played to compliment the traditional signage.

They were very interested in our U-Turn Round audio point due to the fact it runs entirely on wind-up energy, therefore not requiring mains power which was ideal for use on Cardiff Bay. They needed to have it integrated with a sign much like our Audio Sign Turn, however the type of sign they wanted was of a more chunky rounded bespoke design. 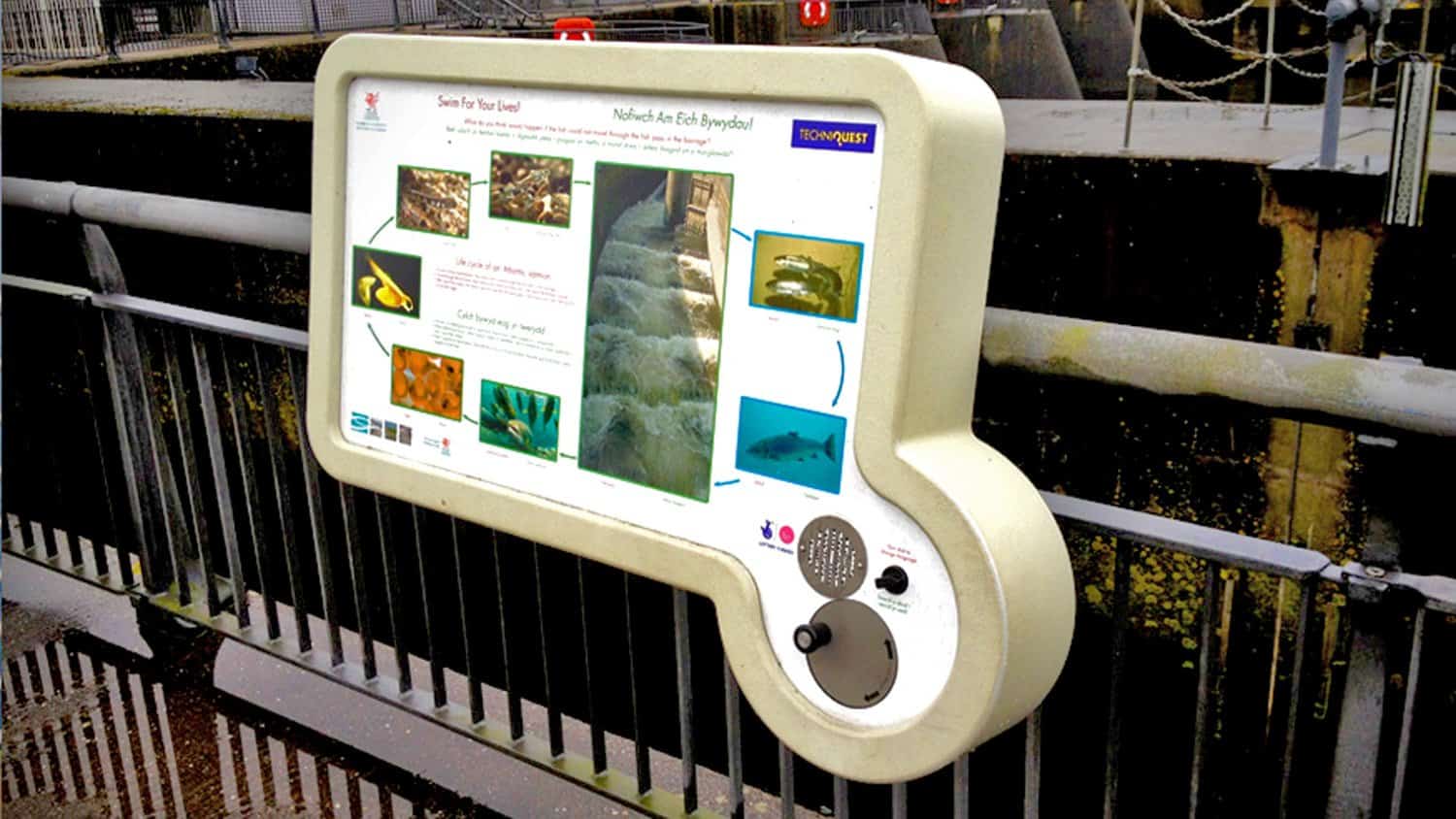 We therefore provided Techniquest with 4 U-Turn rounds without the standard 3mm thick marine grade stainless steel front plate, allowing them to integrate with the bespoke signage they had commissioned with a third party. An area was created for the U-Turn to sit and the sign is placed over the top, with a slot for the handle and message selector.

The end result is rather unique and certainly adds something to Cardiff Bay. The fun design of the chunky signs fits well with the functionality of the U-Turn which people really enjoy winding in order to hear the content they contain. It’s this quirky element that makes the U-Turn such a popular listening point, there is something about a wind-up audio point that people just can’t resist.

To see the U-Turn sign in action, watch the video below!