Each of the four zones is modelled around the characters Dyfi, Ponti, Lecsi, and Ogi who themselves represent the arts or professions supported at the Centre along with a Welsh material used in its construction.

The Wales Millennium Centre in Cardiff is the home to a total of 8 arts organisations, including the National Orchestra and Opera, dance, theatre and literature companies. Located in Cardiff Bay the structure (nicknamed the Armadillo) comprising 2 halls, a large theatre and shops, bars and restaurants is incredibly striking in appearance. Built entirely from Welsh materials, the centre was designed to emulate various parts of Wales with the use of slate, metal, wood and glass.

This theme was continued in the new Milipwts’ Den, installed by blackbox-av and opened Easter 2013.

The Millennium Centre has opened the Milipwts’ Den as a way to engage families and help teach children about the Centre and the role it plays for the arts. Originated and designed by Hemisphere, brought to life by the animations of Studio Liddell and made a reality by blackbox-av, this new addition to the Centre has seen a friendly and very talented group of bugs move into a space next to the Glanfa concourse.

Blackbox-av supplied and installed the hardware required for the AV aspects of each zone, four of which unite to make up the entire ‘area’. Each of the four zones is modelled around the characters Dyfi, Ponti, Lecsi, and Ogi who themselves represent the arts or professions supported at the Centre along with a Welsh material used in its construction. 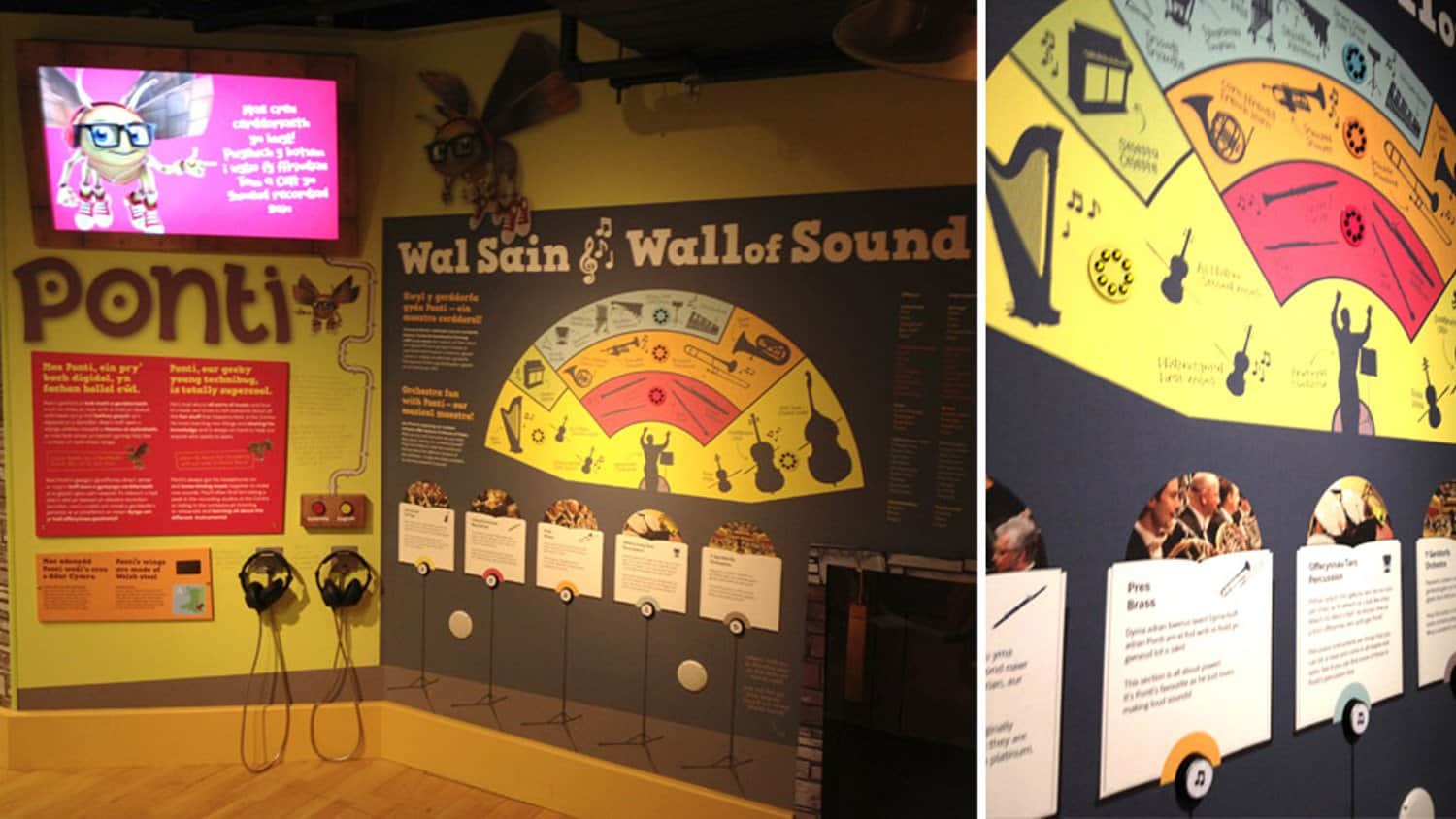 Dyfi is the ‘glamour-snail who’s always centre stage’. Her shell is made from Welsh wood and she represents the shows, musicals and ballets that take place in the Centre.

In this zone children are invited to dress up and play the role of 8 different popular characters from the theatre, such as Oliver Twist, Mary Poppins and Figaro. Here we created a custom jukebox using a soundstore and amusement buttons with colours corresponding to the various characters. Kids select a character then pick up a ‘dress up board’ from the dressing room chest behind and can sing or dance along in the movie star-esque mirror. Around the mirror we installed a custom LED lighting controller that phases through various colours, with the option to manually select a colour / level setting.

The dressing up boards are reminiscent of the funny images you can poke your head through at the beach except made from Foamex rather than wood! So far families have really had fun messing around with them by the mirror.

Ponti is the ‘music loving technibug’. His wings are made from Welsh steel and his interests lie in the musical aspects of the Centre, such as the orchestra and recording studio.

In the Ponti zone children and families are invited to watch a video about the in-house recording studio at the Centre and then learn about the various aspects of an orchestra on a ‘WallofSound’ i.e the strings, woodwind, brass, and percussion. The video is played by the push of a button selecting Welsh or English and listened to via two armoured cable headphones.

The ‘WallofSOund’ was a bespoke build using a soundstore with colour coordinated buttons activating each orchestral section which then lights up bespoke LED clusters built into the graphic on the wall. Visitors can listen to each section independently by pushing and holding each button, or hold the last button to listen to them all combined. 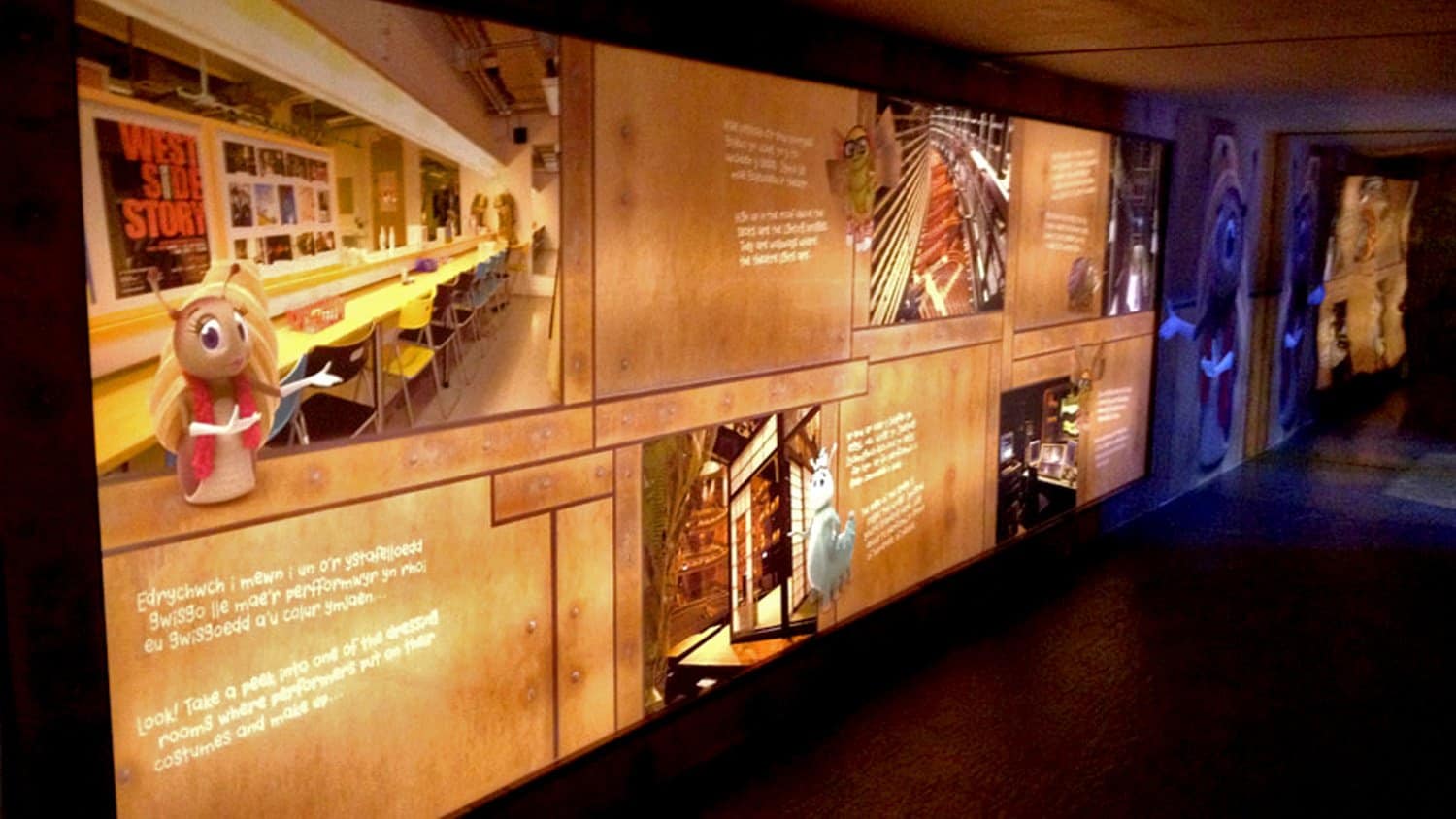 Ogi is the ‘wise and wordy book-beetle’, he represents Welsh slate and his zone is an area for children to play with words. He is also slightly more secretive than the rest and has a tunnel that runs behind Ponti’s area.

Ogi’s tunnel entrance starts next to the Ponti zone and declares there are ‘no parents allowed, by order of the Milipwts!’. From there kids can crawl through and learn about the different aspects of backstage work that goes into the impressive productions hosted at the Millennium Centre. To keep the tunnel atmospheric the only light comes from a back glow behind the interpretation signage. We created this with custom LED lighting connected to dimmers which can be manually adjusted should the need arise.

Lecsi is the ‘lovable, luminous glowbug’ who just loves to dance! She represents Welsh glass and introduces visitors to the various forms of dance performed at the Centre.

Her zone recreates the theatre stage with graphics of an enthralled audience looking back at you waiting for you to dance! Visitors are invited to stand beneath a sound shower and in front of a 42″ flatscreen where after selecting a button that corresponds to a genre of dance, such as Ballet or Contemporary, they can copy the dance moves displayed on the screen and watch themselves in the mirror. The sound shower keeps the audio mainly enclosed to Lecsi’s specific zone and helps create an immersive experience.

The area itself opened in April 2013 and is free for the whole family to explore.