{
None of it would have been achieved without Blackbox-av’s knowledge, collaboration and commitment to deliver the electronic element of our exhibition. Blackbox-av helped bring our exhibition to life.

The Bawdsey Radar Trust have recently reopened the world’s first operational radar station, following a refurbishment, adding a brand new exhibition to their visitor centre. After being awarded a £1.4 million grant from the Heritage Lottery Fund, the trust has worked to preserve the transmitter block built in 1936, as well as bringing their oral history project, that gathered stories from key individuals who served at RAF Bawdsey, to life. The original building was built by Robert Watson-Watt following extensive research at Orfordness. It was the first of the chain home radar defence system used during the Second World War. RAF Bawdsey developed many radar firsts during this period. 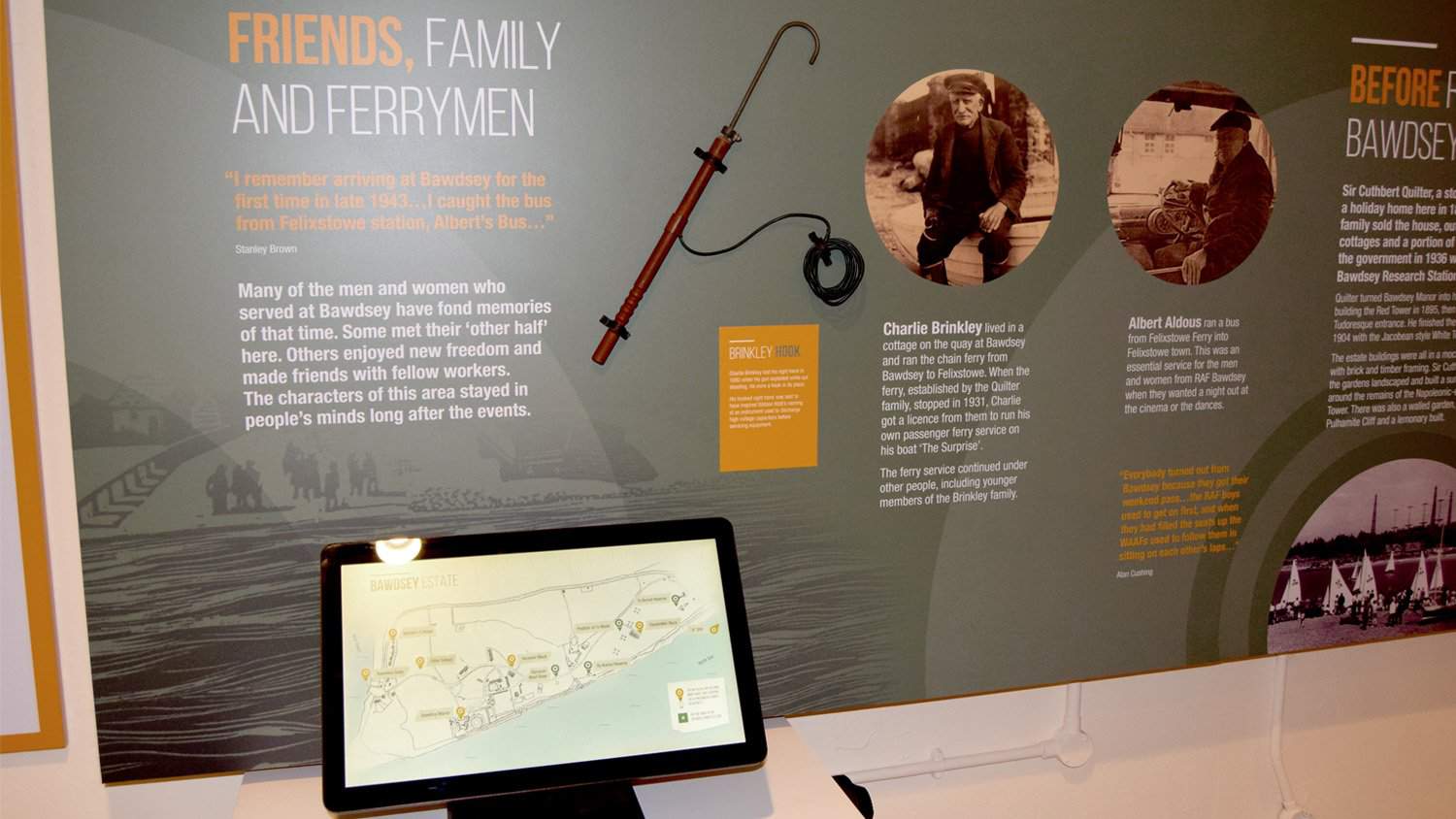 For the refurbishment we were comissioned to provide audio visual interpretation working in collaboration with PLB who were responsible for the centre’s design. A number of our standard products as well as bespoke creations were supplied for this installation, each helping to tell the story of the building during World War Two. There are currently nine sections of the visitor centre that  provide a timeline of how radar was created, from the people who developed radar, to the history of the Bawdsey Radar estate which currently dates back over 130 years. The AV interpretation is noticeable immediately as you enter the visitor centre where a PIR sensor is triggered, activating audio “a call to war” as visitors walk down the long corridor.

Three of our 22″ All-in-One Touchscreens were supplied for the installation, two of which are programmed with our off-the-shelf software Lightbox 2, populated with content by the Trust themselves. This allows visitors to view Bawdsey Radar’s history at their own leisure while digitising documents previously not available to the public.  There’s also some bespoke software which allows visitors to view a map of the Bawdsey estate. The map pinpoints key areas of the estate allowing visitors to select it for further information. 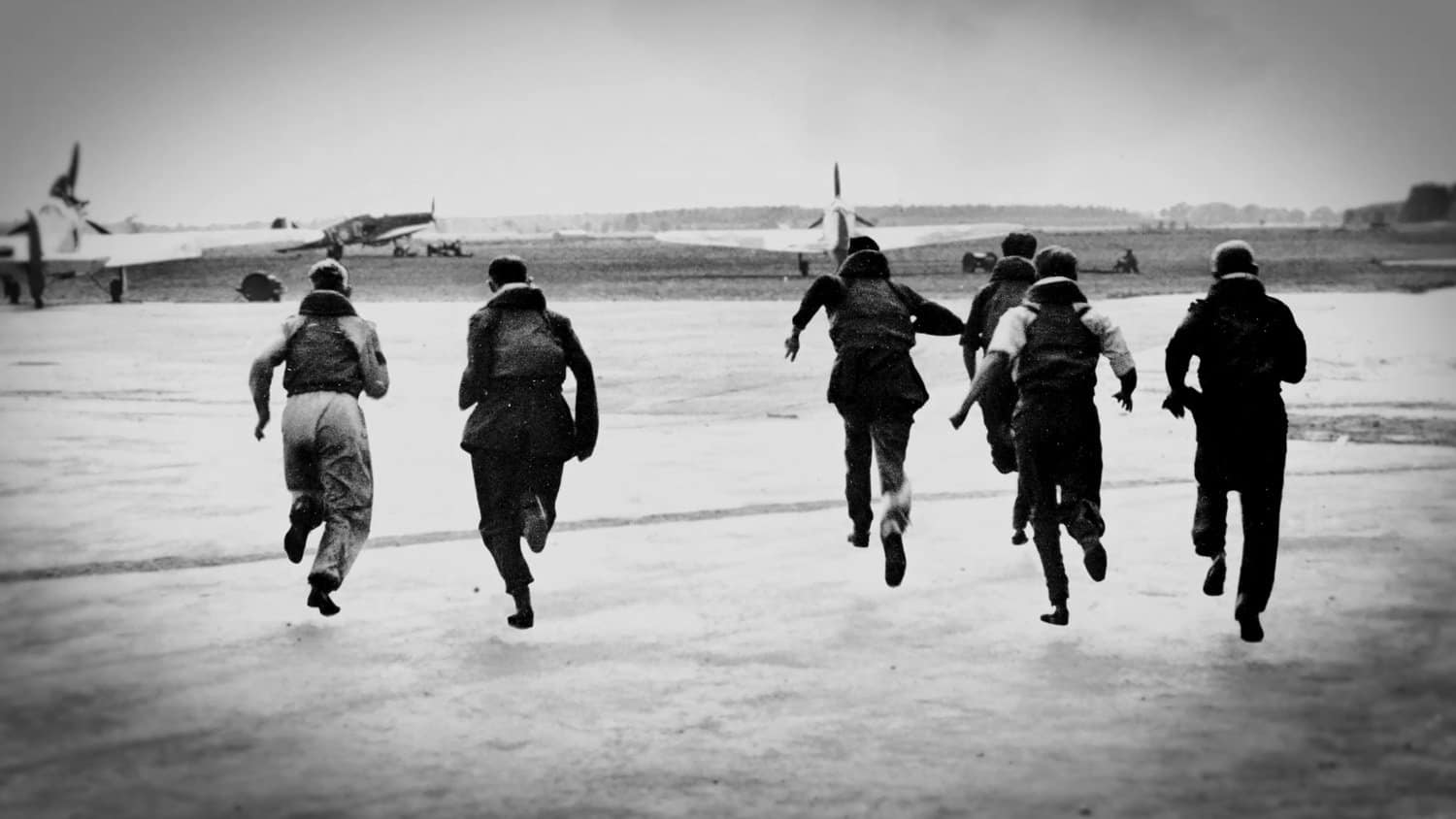 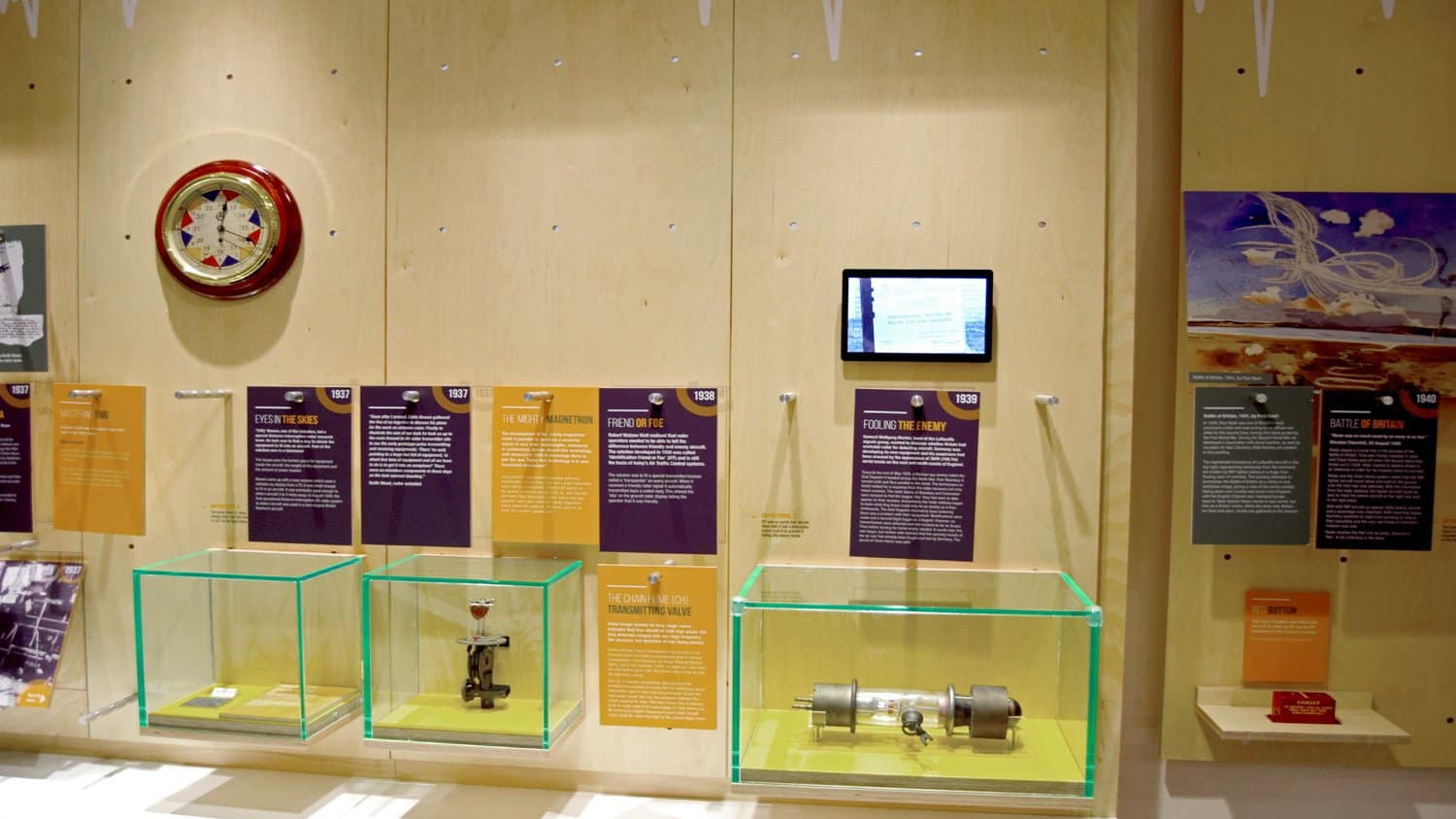 Another key area of the centre is the timeline wall. This documents key moments in the creation of Radar, and how Bawdsey played a key role in the development. Two of our 10″ Open Frame Video Screens were utilised to showcase an interactive slideshow, which showcased photos of Bawdsey Radar and the people who worked there during the Second World War. 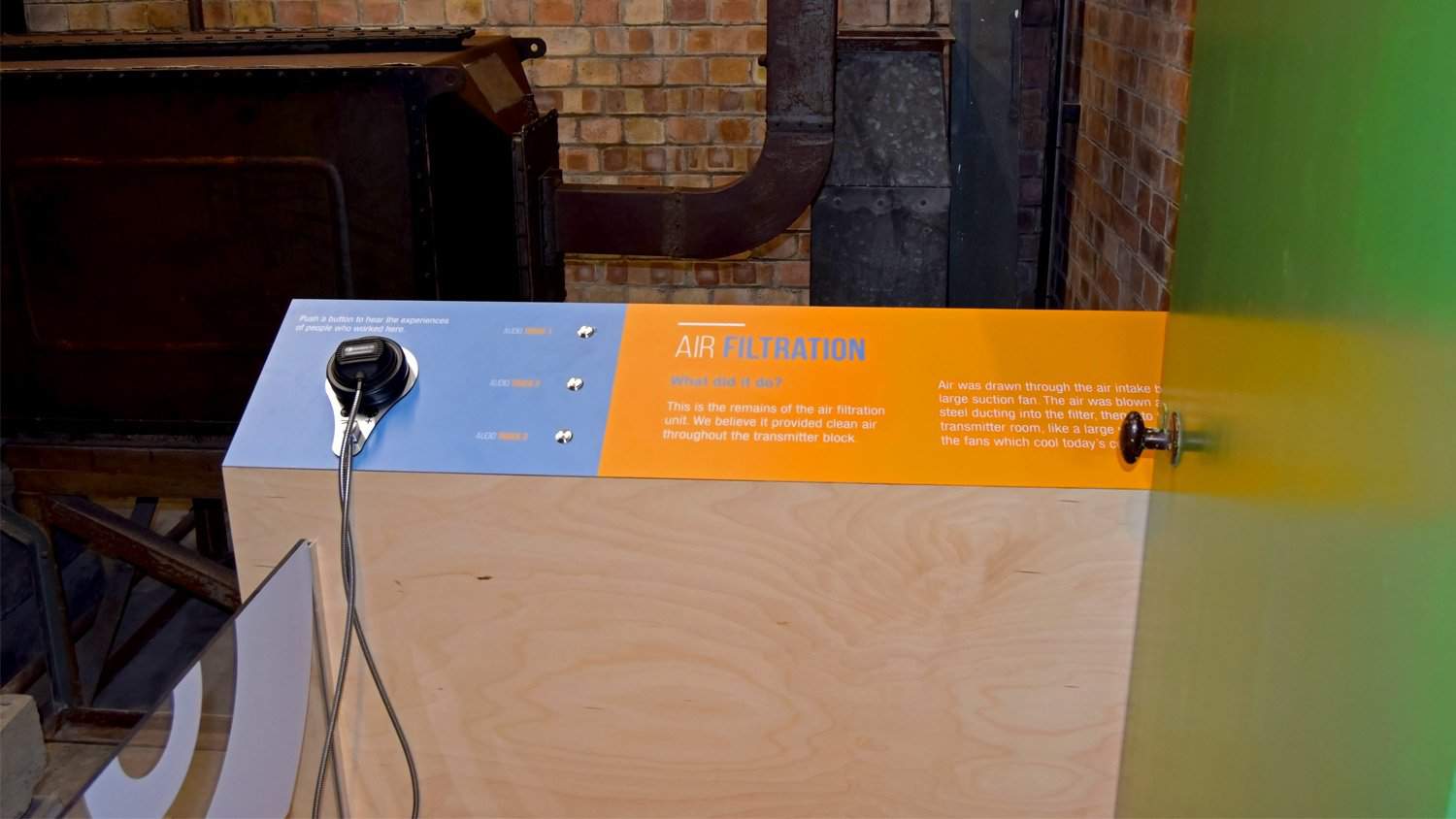 Six of our Single Cup Armour Cable Headphones and our SoundClip-2 Audio Players were also supplied. These were each placed in different areas of the centre, including the air filtration section, where visitors can navigate through the audio tracks with our Stainless Steel Buttons to listen to interviews with people who worked in the Air Filtration unit. They are also used with our all-in-one touchscreen to provide audio as visitors navigate the interactive Bawdsey estate map. 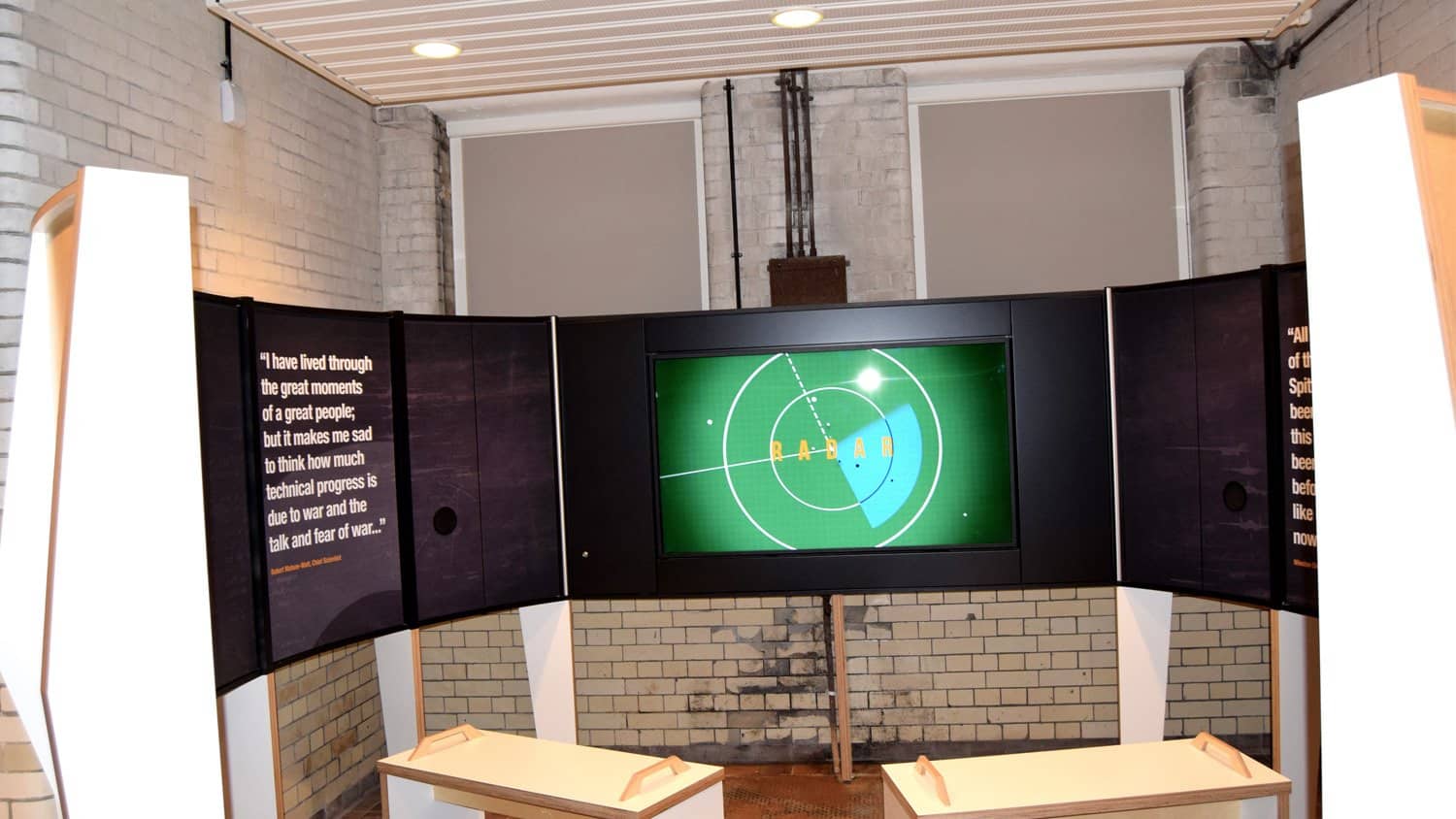 We also supplied the Video Clip HD8, which was fitted with a Small PIR Sensor and connected to a 65″ screen with four speakers either side. A small looping video plays as an attractor when not in use, which then goes on to play a series of videos when the PIR sensor is triggered explaining the origins of the radar, how radar works and how the creation of radar went on to help Britain win the Second World War. 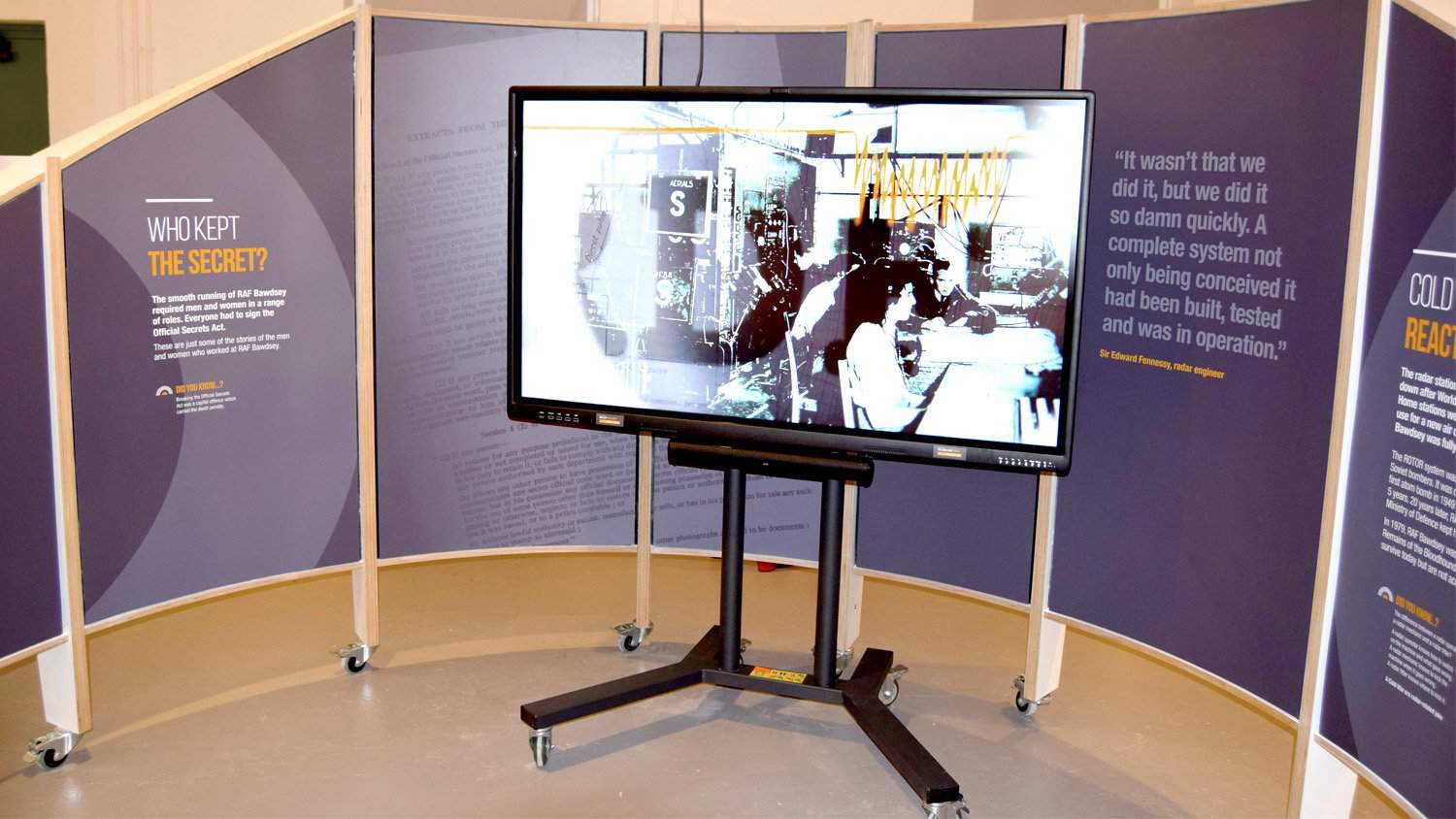 A key interpretive element at the visitor centre is a bespoke 65″ touchscreen. This displays content about “keeping the secret” of the radar technology and introduces the people who helped make Bawdsey Radar an important asset during World War Two. Two videos can be chosen on this touchscreen which show two former operators sharing their experiences of working at Bawdsey Radar. This element was specifically designed on wheels so it can be easily moved throughout the building without any hassle.

The new visitor centre has allowed the Bawdsey Trust to preserve the building’s long history for future generations, and tells the tale of how radar technology has shaped the world from the 1930’s up to present day.