We were approached by Llanyrafon Manor who were originally interested in using an outdoor touch-screen kiosk to help engage visitors and inform them of the various local wildlife that has taken up residence at the Manor and grounds.

Llanyrafon Manor is one of the most historic buildings you can find in the friendly Welsh town of Cwmbran. Opened to the public in June 2012, this grade II listed building was first constructed sometime in the 1550’s, with a colourful past that includes bitter family feuds and ‘land girls’ during World War 2, the Manor and surrounding area is rich in history.

At some point during the late 20th Century the building fell into disrepair, however thanks to efforts by ‘Friends of Llanyrafon Farm’ and the Torfaen County Borough Council with the aid of Heritage Lottery funding the Manor has been brought back to life and is now open for the public in its new role as a Rural Heritage Centre.

We were approached by Llanyrafon Manor who were originally interested in using an outdoor touch-screen kiosk to help engage visitors and inform them of the various local wildlife that has taken up residence at the Manor and grounds. However the original brief evolved over time until the project manager concluded that a selection of interpretive panels incorporating audio would provide a more diverse visitor experience and make better use of their available budget. This was after a requested demonstration of our audio signs, the Touch and Turn version, of which both were eventually used. 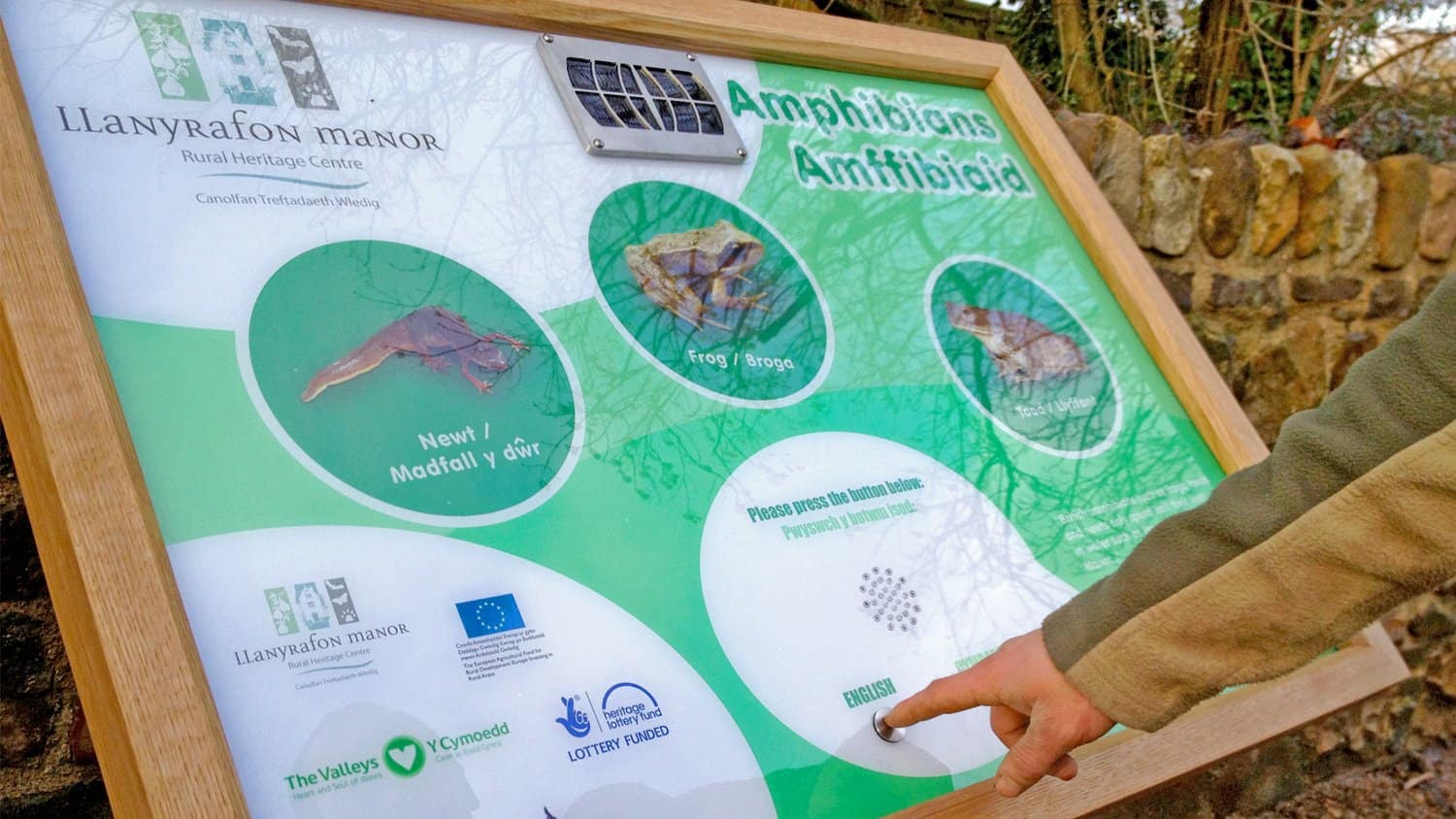 The green themed A1 interpretation panel contains a single message in both English and Welsh about the local Amphibian population. Powered by our highly efficient Solar Electronics users simply press the left button to hear the message in English, or the right button to hear the message in Welsh. The script for this message (and all the other signs) was written by Llanyrafon Manor, which we then recorded and edited, we also provided the graphic design. This sign is housed in an oak frame and presented on a lectern stand with a polycarbonate protective face, it was installed on site (on a surprisingly clear Welsh day in December!) by us. 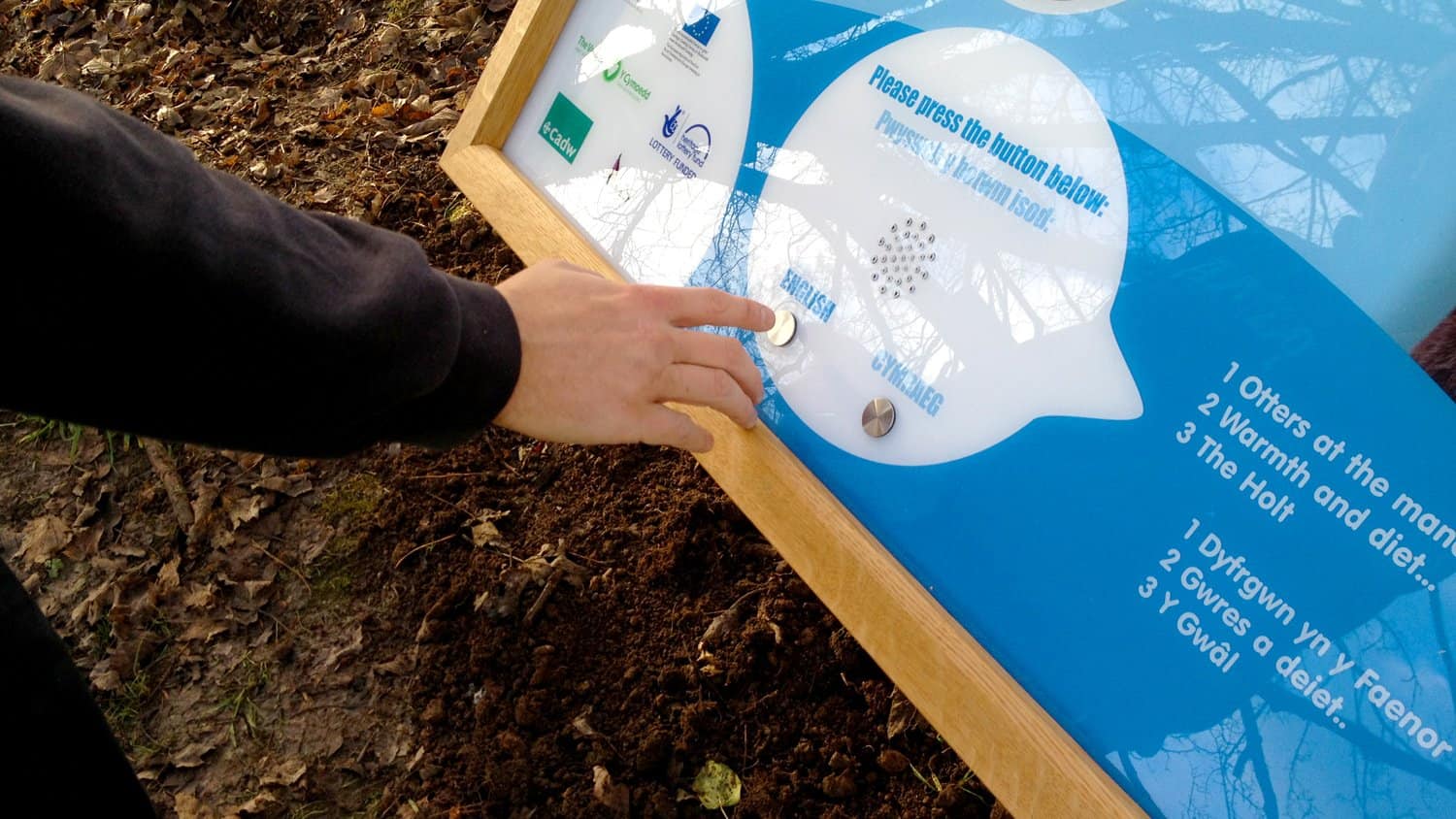 The blue themed A1 interpretation panel contains three messages in both English and Welsh about Otters that can be seen on the Manor grounds. Just like the Amphibians sign it is powered by our solar electronics and has two buttons, one for English and one for Welsh. However each plays 3 messages incrementally instead of just one and allows skipping, i.e to go straight to message two you can push the button twice and skip the first message. Again housed in an oak frame with a polycarbonate protective face, installed by us and presented on a lectern stand. 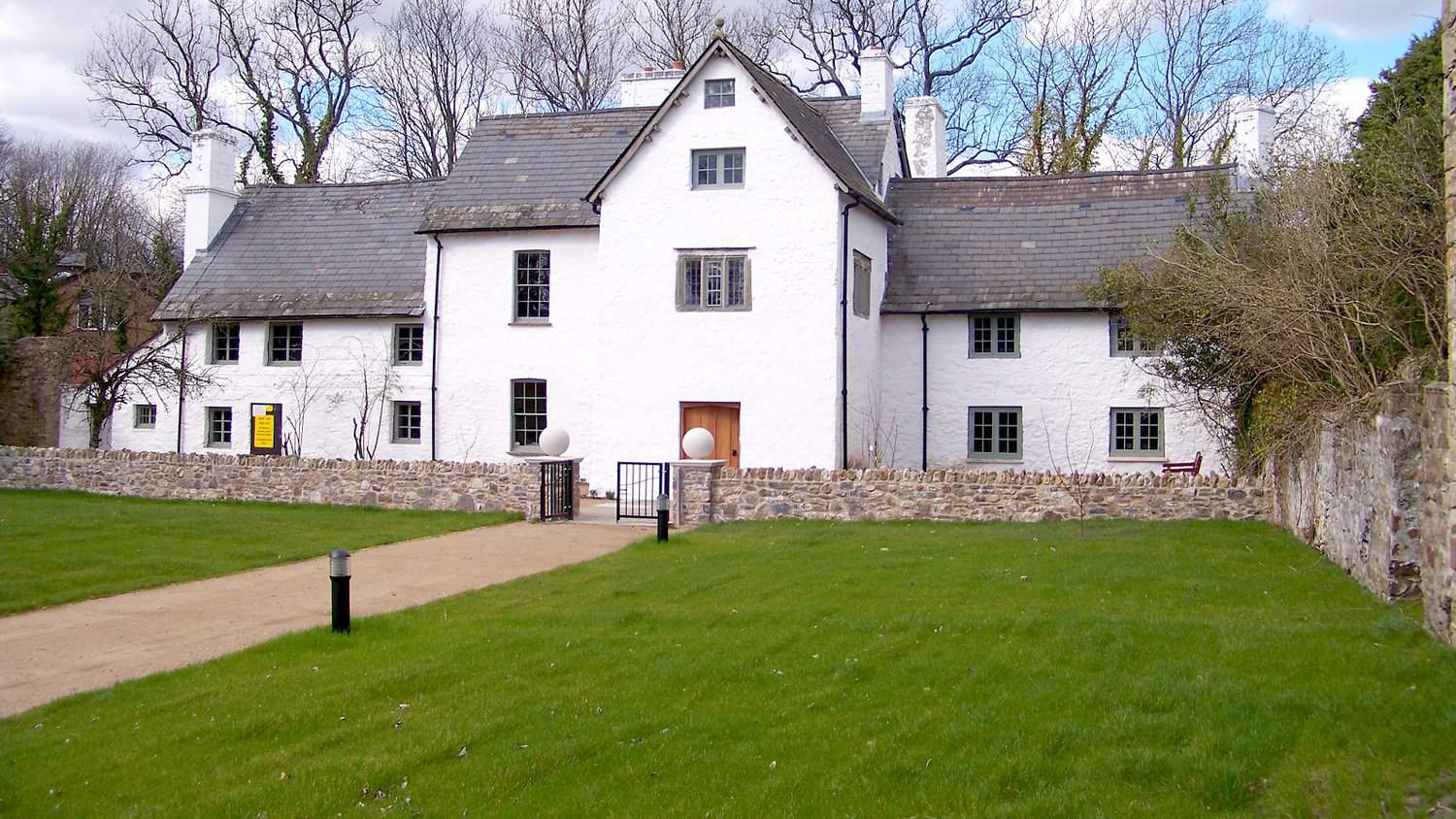 The brown themed A1 interpretation panel presents users with four messages in both English and Welsh regarding the various Bats who have set up home at the Manor. This is an example of our Audio Sign Turn which is powered by a bare bones version of our U-Turn Round, it gets the energy required to play each message from good old fashioned hand power as users turn the handle. This makes it ideal for the location chosen which is inside a building on the Manor grounds, removing Solar power as an option save for running cables to the roof. Users simply turn the dial to select the message they want to hear, then turn the handle until it begins. Housed in an oak frame with a polycarbonate protective face we mounted this sign directly to the wall. 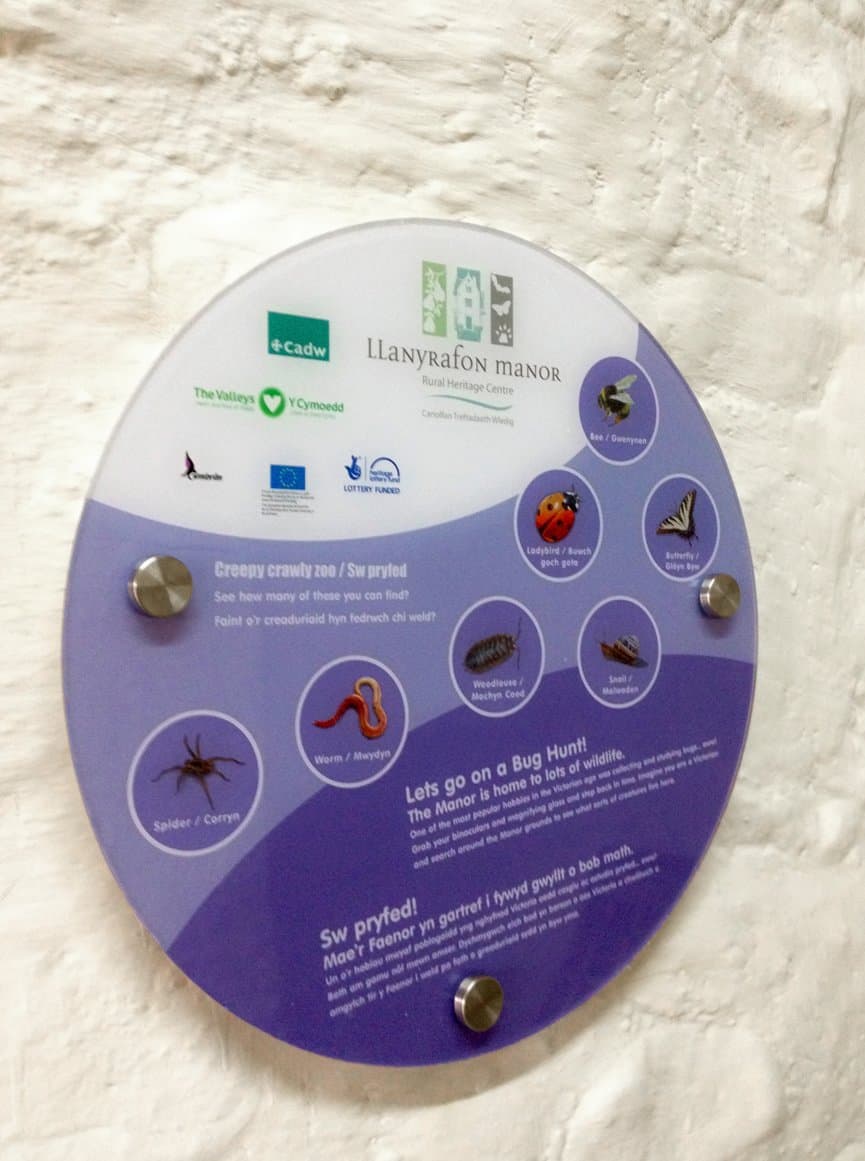 The final purple themed sign doesn’t contain audio but is instead a standard sign aimed at getting younger visitors involved in a bug hunt. Collecting bugs was a popular hobby during the Victorian era as the sign explains, it then encourages visitors to go and search for some around the Manor challenging them to see how many of the seven listed they can find.

These four signs combined have added a nice interactive element to the visitor experience at this historic site. Use the tabs above to discover more about the products used and what’s going on at Llanyrafon Manor.