{
…buttons around the perimeter when pressed light up different sections of Harbour waterways whilst 8 Touchscreens with our easily customised off-the-shelf heritage interactive software provide further information / timelines and ‘match the pair’ memory games for each associated section. It’s an extremely effective way to consolidate a vast amount of information and share it in an easily absorbed visual medium.
Underfall Yard is a working boatyard that dates back to the early 19th century. Following restoration in the 1990’s it’s now a Scheduled Ancient Monument which includes a number of listed buildings. Unlike many heritage sites Underfall remains in operation, run by a cooperative of craftspeople dedicated to traditional maritime skills. 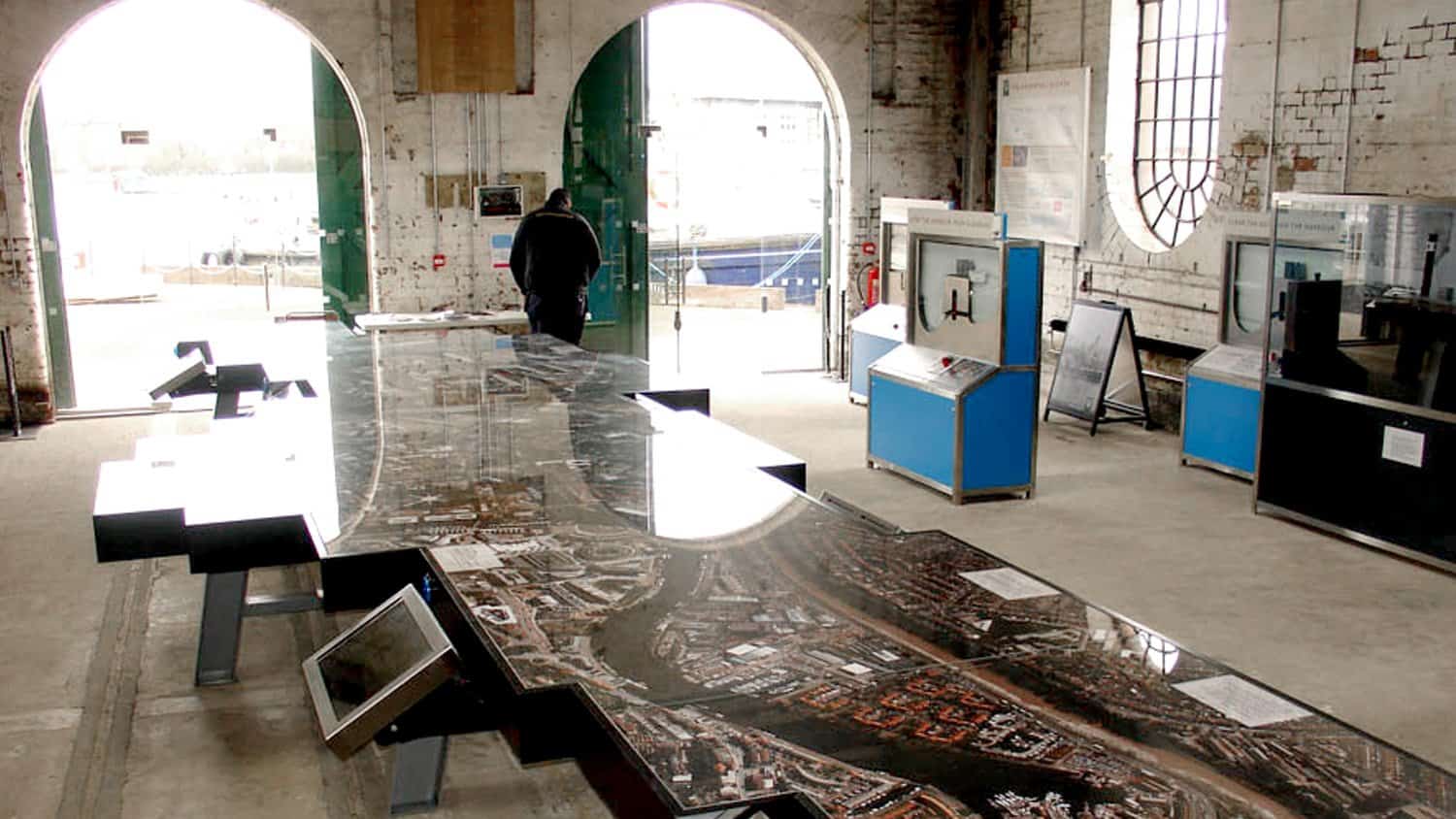 It’s importance in the development of Bristol (and surrounding areas) thanks to the creation of a floating harbour cannot be understated, making Underfall one of the most significant heritage sites around. Visitors to the site can now learn all about Underfall thanks to the creation of a new Visitor Centre – which we were delighted to be a part of.

Smith and Jones Design Consultants provided interpretive design for the project, as their first choice of hardware and software supplier we were subsequently brought on board to supply and install all audiovisual solutions for the site. 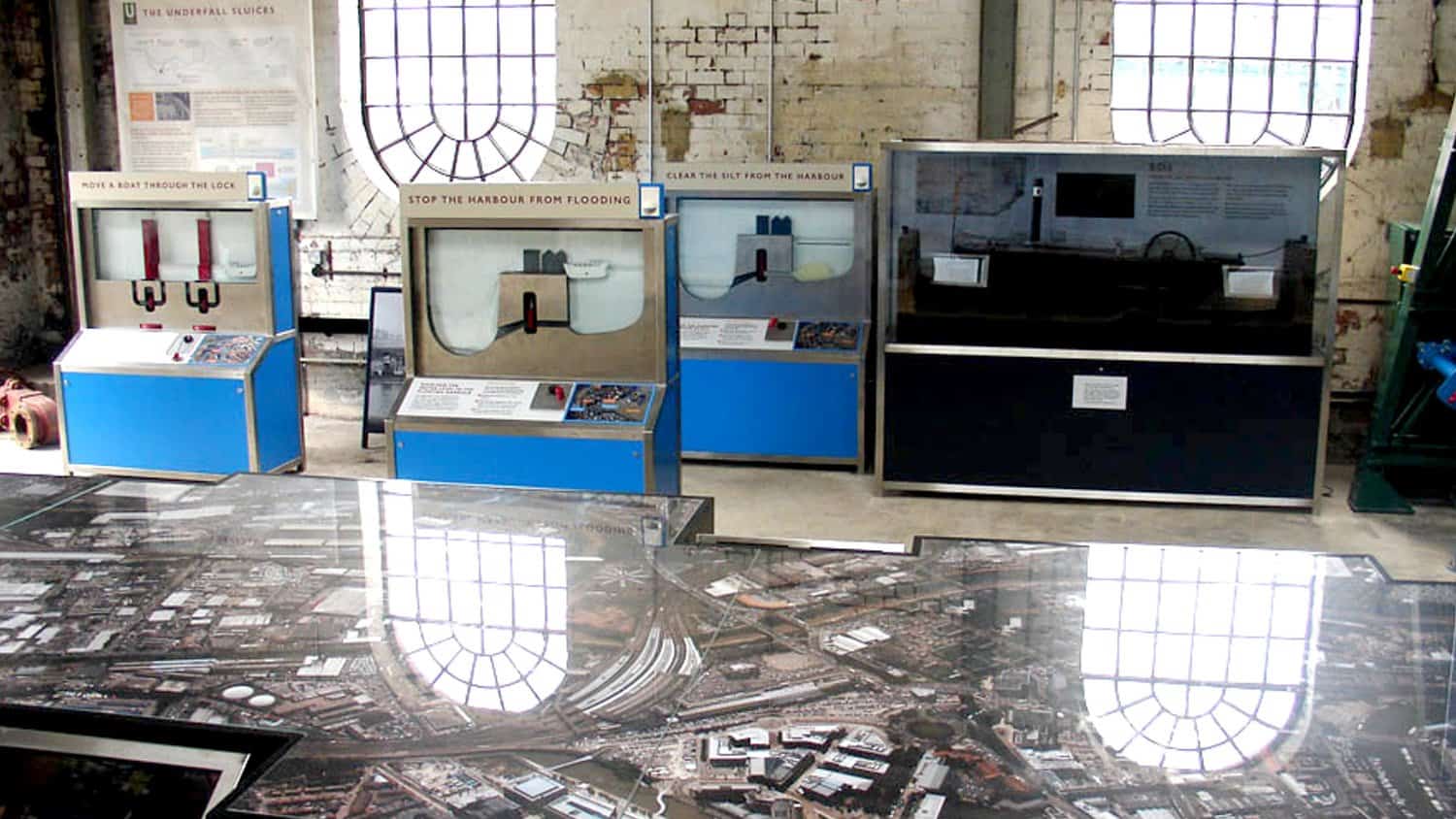 Built within the old industrial power house the visitor centre showcases a robust maritime theme. The plan was to tangibly teach visitors about Underfall – so to this end a number of hands on mechanical interactives were developed which allow visitors to learn how the lock systems work, silt is cleared, harbour flooding is avoided and the hydraulic accumulator functions. 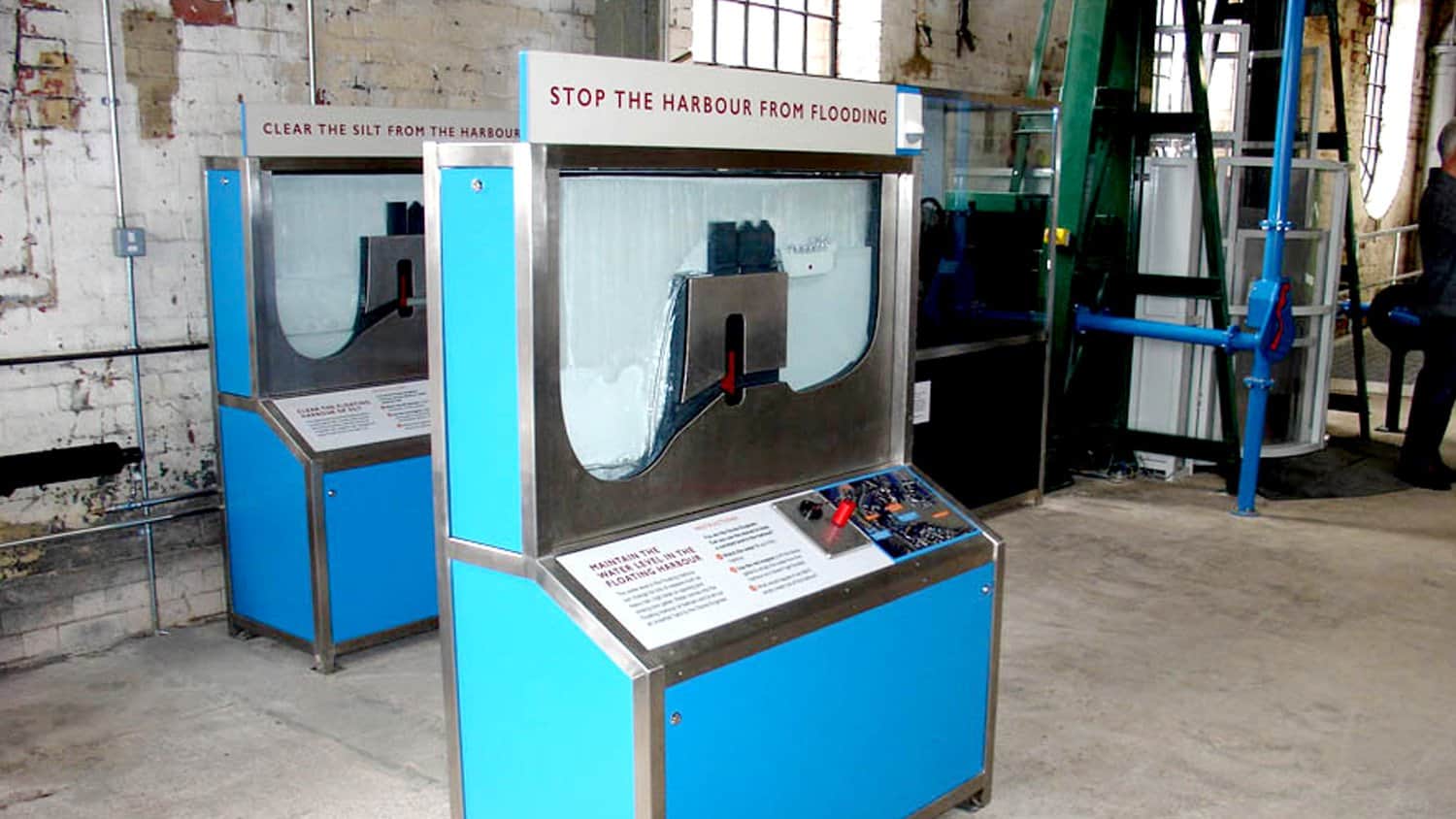 A huge aerial photograph table provides a focal point for the centre, at 10 meters long the table depicts the entire Bristol Harbourside – buttons around the perimeter when pressed light up different sections of Harbour waterways whilst 8 Touchscreens with our easily customised off-the-shelf heritage interactive software provide further information / timelines and ‘match the pair’ memory games for each associated section. It’s an extremely effective way to consolidate a vast amount of information and share it in an easily absorbed visual medium. 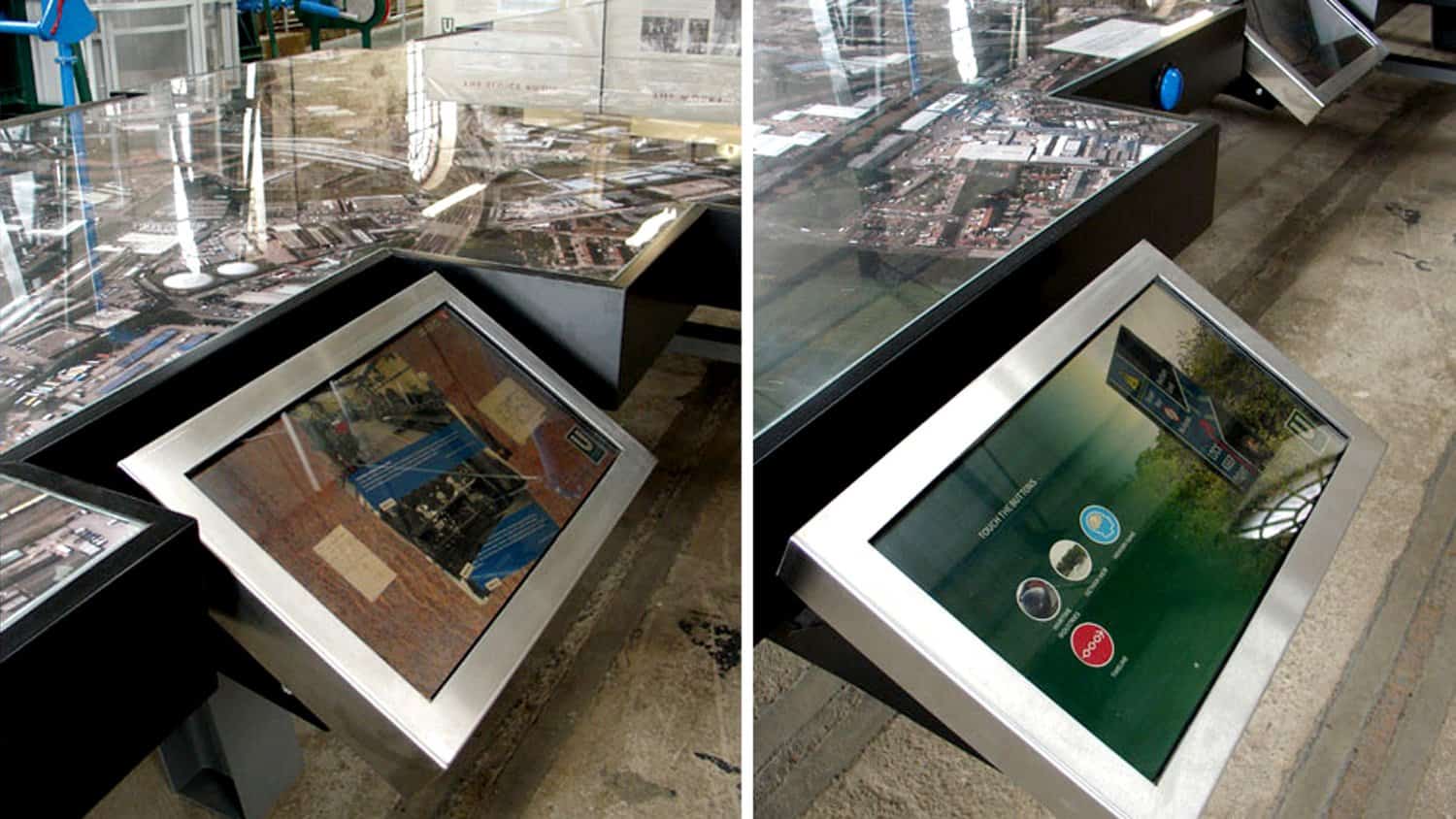 With plans to reconfigure the space depending upon events and the wish to avoid trails of cables we were tasked with developing a number of battery powered free-standing audio and video units. These units can be easily wheeled into place and taken away for recharge when required. 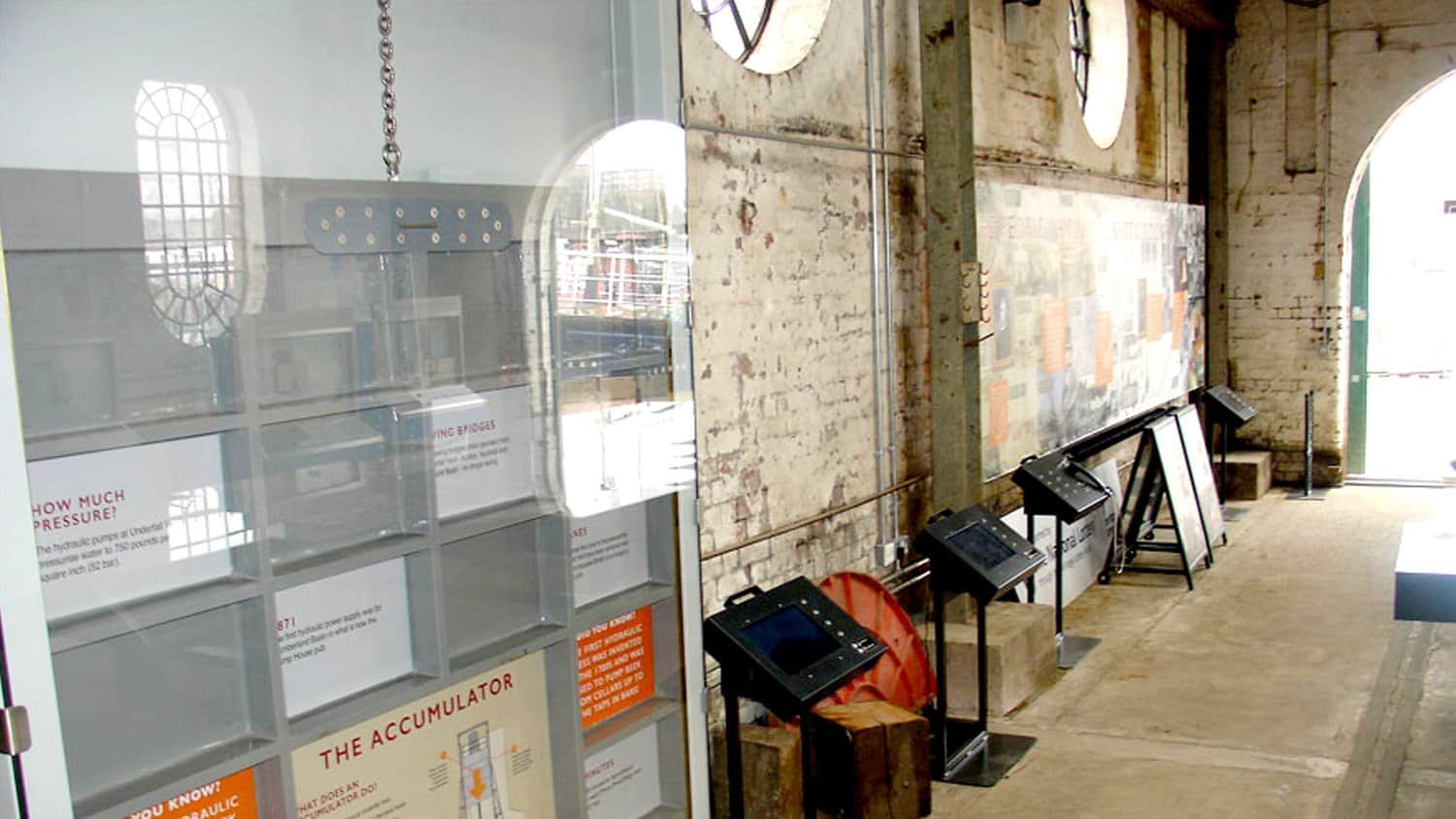 Since its opening the visitor centre has received over 16,000 visitors in just a few months, so far garnering great visitor feedback.